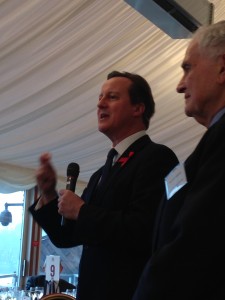 I was delighted to attend the Parliamentary and Scientific Committee’s annual lunch at the House of Lords on behalf of the EPC on 26th November.  We were wondering why security was so tight…David Cameron was the surprise guest of honour, coming straight from Prime Minister’s questions to give the pre-lunch speech. He congratulated the cross-party Committee on the work it had done to promote science research as well as interest in STEM subjects more broadly and stressed the importance of science historically to the nation’s economic development, reputation and global position. He also said that the government’s belief in the importance and value of science was reflected in their increase in spending on the science budget – perhaps a slightly uncomfortable statement for some in the room as, in fact, there has been a real terms cut in the budget – that said, given the current economic climate, we have to acknowledge that science has done less badly than most sectors.

Looking to the future, Mr Cameron called on the PSC to help to keep the UK at the forefront of global research by joining the national debate on issues such as stem cell research, nuclear power, ‘fracking’ and GM foods. Politicians alone could not win the arguments with those who are ‘anti-science’ he argued…

I’d absolutely agree that it’s essential we provide evidence-based argument on these topics  – and we at the EPC will continue to do so.  But it sometimes feels as if that the science and engineering community is not always providing politically convenient answers.  One, very topical, example from my own area of research interest is the future of energy supply.  A detailed risk analysis of nuclear power in relation to other activities which we seem to be happier to pursue suggests (to me) that it should it be part of our energy mix – especially as it doesn’t produce CO2. Scientific evidence that climate change is rapidly heading this way is now very strong, which means that ‘fracking’ for gas might not be such a good idea. Better than burning coal no doubt, but not so good if it displaces renewables instead.  Perhaps one of the best outcomes from ‘fracking’ might be that it provides something more serious to worry about than wind turbines spoiling the view…An over-simplification of the problem, I know, but illustrating the various options and choices that our largely non-scientist politicians have to make.  All the more important, then, that we, with our members, continue to work with the Parliamentary and Scientific Committee and other partners in presenting the evidence on which we hope policy will be based.